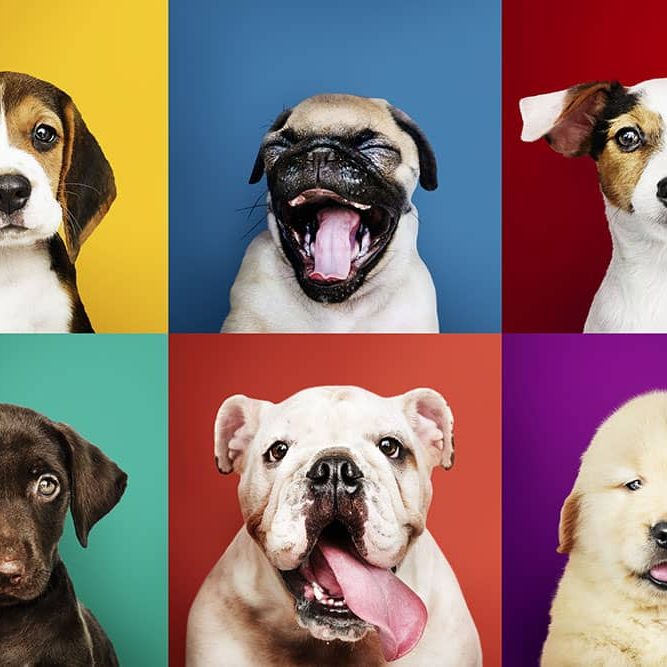 The basics on dog breeds.

How many breeds of dogs are there?
The canine species is distinguished by the great diversity of its representatives, whether in terms of morphology, size, color, type of coat, or even character.

There are now several hundred dog breeds, but it is impossible to define their exact number. Indeed, as there is no precise rule at the world level, the cytological organizations of the different countries can freely set their own criteria. Thus, each of them is free to consider such a dog as a separate breed, a variety of another breed, or not to recognize it at all. Thus, where some of them barely recognize a hundred races, others recognize three times.

Standards, scientific definitions of breeds
As soon as an organism chooses to recognize a breed, it establishes a standard - or takes up the one already established by another organization that preceded it, translating it if necessary.

A breed standard describes all the characteristics that a purebred dog (that is to say one of which both parents belong to the breed in question) must have in order to be able to be entered in the register kept by the organization. . This studbook records the pedigree of each of the individuals whose belonging to the said breed has been officially confirmed by the organization.

Canine breed groups
In addition to having full latitude as to whether or not to accept a particular dog, each canine organization is also free to determine how it classifies the breeds it recognizes. Indeed, all bring together the breeds in different groups, generally taking into account both their historical use (hunting dog, sheepdog, working dog, etc.) or the physical characteristics they share (greyhounds, spitz, etc. ).

The nomenclature of breeds recognized by the Fédération Cynologique Internationale (FCI), which oversees the national organizations of around one hundred countries (including the French Central Canine Society and the Belgian Royal Saint-Hubert Society) is thus made up of 10 distinct groups, which themselves have various sections and subsections. Like the American Kennel Club, the Canadian Kennel Club has chosen to define only 7 groups, without any subdivision.

The unequal distribution of dog breeds
The fact that an organism does not recognize a breed can also be linked quite simply to the fact that it is absent or insufficiently represented on the national territory.

Indeed, gigantic differences exist in terms of distribution and popularity: where the most popular dog breeds in the world represent several hundred thousand annual births and are present in all four corners of the globe, the total population of dog breeds the rarest number only in tens. There are also breeds whose representatives (though sometimes numerous) are grouped together almost exclusively in their country - even in their region - of origin and have not really crossed its borders, which may explain why they are are not recognized elsewhere than in their native lands.

Dog breeds keep evolving
It has been several thousand years since humans have domesticated the dog and use the incredible talents of the dog breed to help them in various tasks: hunting, herding herds, transporting loads… Dog breeds have therefore been "Improved" over the ages through the selections and reproductions orchestrated by Man, so as to correspond as best as possible to the missions entrusted to them. The latter have themselves often evolved over time, in particular under the effect of technical progress.

As a result of these breed changes, even some very old dog breeds today look substantially different from what they did less than a century ago.

Changes continue to take place nowadays, but they are more often the result of aesthetic reasons or animal protection (through for example the ban on cutting the ears). In fact, even ancient breeds can still see their appearance evolve, depending on what is considered desirable or on the contrary as a defect. Each time, this implies an update of the breed standard, but the modification in question may not be to the liking of this or that organism. For example, a dog of a given breed wearing a certain coat color to be recognized in one country, but not in another.

The fact remains that certain races appeared at the base spontaneously and have only been very little modified by the hand of man; we then speak of a primitive or natural breed of dog. Like the spitz, for example, such individuals often resemble their ancestor the wolf: pointed and erect ears, long muzzle, rather independent character, etc.

New breeds constantly
The list of dog breeds is constantly evolving, due to the extinction of some of them, but especially to the appearance of new ones.

Indeed, yesterday as today, many breeds are created "artificially" through more or less sophisticated work, both at the start, to select the very first breeders and, subsequently, (to exclude each generation from the reproduction (subjects not corresponding to the desired result. But also sometimes to organize new crosses with other races, in order to evolve in such or such direction). In just a few decades, some new dog breeds have managed to spread all over the world and achieve great success around the world.

In fact, enthusiasts continue to regularly create new breeds from crosses involving representatives of several already existing breeds, and manage over the course of successive selections and reproductions to constitute a population of sufficiently homogeneous individuals on the physical planes. and behavioral. It is indeed a prerequisite to be able to claim recognition by any organization whatsoever, and which explains why the creation of a new breed is a long-term endeavor with uncertain outcome.

How can I stop my dog from barking?Good to know about the character of the dogThe essentials on dog breeds