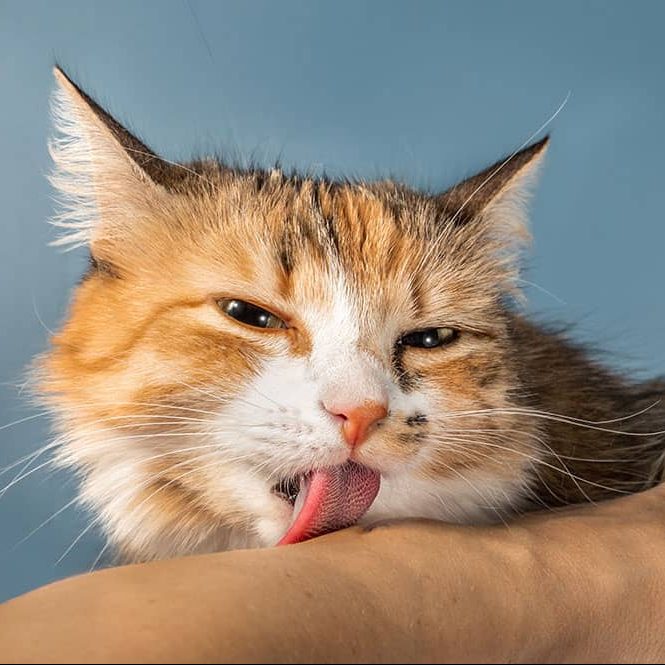 Why is my cat licking me?

Felines are wonderful and surprising beings. Although many claim that they are very independent pets, they are also affectionate and enjoy spending time with their owners. The demonstration of affection of our four-legged friend can challenge… especially because of the texture of his tongue when he wishes to demonstrate it! In this article, we explain why your cat is licking you.

The language of cats

If your cat licks you frequently, you'll probably be wondering why she is doing this. There are several possible and we tell you about them below:

1. A way of establishing social ties

Cats don't just groom themselves, they also take care of those around them. As some areas are somewhat difficult to "reach", despite their contortionist qualities, they still need the help of another feline (mother, brothers, companions) to complete their personal hygiene ritual.

This doesn't mean that your cat is licking you because he thinks you are dirty, but it is a way for him to bond by exchanging scents.

2. A way to express affection

The language of cats is not the same as that of humans. So how does he show you his love? He licks you! To him, you are his family and that is why he does the same with you that his mother did to him when he was a baby. In this way, he expresses his affection and shows you that he is comfortable by your side. Also, it can be a way to congratulate yourself by expressing that he feels safe around you.

3. One way to reduce anxiety

If you see your cat compulsively licking (to the point of hurting himself) or expressing some anger at your hand or face, it may be because he is going through a time of stress or anxiety. If you notice that he is suffering from these symptoms, it is possible that he is trying to lick and / or suck on other surfaces and objects such as cloth, plastic, toys, etc. It relieves her tension.

4. An introduction to the game

Playing with our pet is wonderful. For cats, licking their comrades allows them to remember their early childhood, when they had not yet been separated from their brothers and sisters, and from their mother. This bond that your pet has forged with you should not be severed. That's why if he licks you in the middle of a game, let him. It means he's having a lot of fun! Remember that the hormones released during play allow him to relax and feel comfortable.

5. A delimitation of its territory

Cats are animals very attached to the marking of their territory. They try to leave their mark wherever they go so that other cats know that this is their space. Your cat even considers you his property, which is why he licks you. The particles expelled through the saliva attach themselves to you, and that is how you are "marked".

6. An exchange of odors

If your tomcat has been obsessed with licking your fingers and hands lately, it's because you may have handled things that catch their attention. It is normal that he wants to lick you after you have cooked, handled plants or certain other items.

If you have a kitten it is likely to lick you first and then bite you. This behavior is not an aggressive act, on the contrary… for him, it is a game, a simple diversion. He doesn't do it badly. Of course, his bites should be kept gentle.

If it doesn't, you will have to teach it not to do it again. Be careful if he starts biting you too hard and his hair bristles (as this is a sign of discontent) or shows aggressive behavior, this should be eliminated quickly.

Be patient with your kitten if he has just been separated from his mother and if he has adopted you as a protector because he will lick you all the time. It is the same if it is a mother who has had several kittens recently adopted by other families.

Beyond explanation, if your cat is licking you, you should consider it a unique gesture of love and affection. It means that there is a great connection and that he cares about you very much.

How can I stop my dog from barking?Good to know about the character of the dogThe essentials on dog breeds